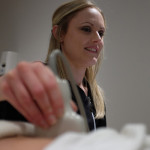 Ultrasound is sound waves with frequencies higher than the upper audible limit of human hearing. Ultrasound is no different from ‘normal’ (audible) sound in its physical properties, except in that humans cannot hear it. This limit varies from person to person and is approximately 20 kilohertz (20,000 hertz) in healthy, young adults. Ultrasound devices operate with frequencies from 20 kHz up to several gigahertz.

Medical sonography (ultrasonography) is an ultrasound-based diagnostic medical imaging technique used to visualize muscles, tendons, and many internal organs, to capture their size, structure and any pathological lesions with real time tomographic images. Ultrasound has been used by radiologists and sonographers to image the human body for at least 50 years and has become a widely used diagnostic tool. The technology is relatively inexpensive and portable, especially when compared with other techniques, such as magnetic resonance imaging (MRI) and computed tomography (CT).

Ultrasound is also used to visualize fetuses during routine and emergency prenatal care. Such diagnostic applications used during pregnancy are referred to as obstetric sonography.

As currently applied in the medical field, properly performed ultrasound poses no known risks to the patient. Sonography does not use ionizing radiation, and the power levels used for imaging are too low to cause adverse heating or pressure effects in tissue.

Ultrasound is also increasingly being used in trauma and first aid cases, with emergency ultrasound becoming a staple of most EMT response teams. Furthermore, ultrasound is used in remote diagnosis cases where teleconsultation is required, such as scientific experiments in space or mobile sports team diagnosis.

For more information, or to make a booking, please contact Winelands Radiology at 021 851 5545.